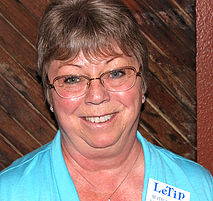 I was born in Akron Ohio and moved to Southern California in 1965. I graduated Downey Senior High School in 1970 and was employed by Bechtel Corp. as a part time graphics designer. Just to be clear I didn't do the designing but brought the design to life via a computer.

My husband and father of my children, was in the Navy and the ship that he was stationed on was the USS Hornet and it was being decommissioned in 1970. He was then transferred to the USS Coral Sea stationed at Hunters Point which meant we were moving to Northern California where we settled in Napa County in 1973. From 1971 to 1978 I was homemaker & mother of two beautiful sons before I entered back into the workforce.

Due to my children being young, I worked for a temporary employment agency that placed me in various positions from secretary, bookkeeping, accounting, and anything clerical from week to week. This type of work was enjoyable and educational as it gave me an opportunity to learn how many businesses operated. After several years of just temp jobs, I found permanent employment with a small business machine company in Napa.

Unfortunately for me a couple years went by and the company went out of business. I held two other jobs with businesses in Napa and in 1987 I went to work for Stratton & Associates until 2014 when I purchased the business. So here I am. I am a Registered Tax Preparer with Internal Revenue Service and with the State of California. It is required that I complete no less than 20 hours of continuing education each year and renew my licenses.

I love what I do. I work hard to make my clients feel at ease when they come see me as it is important to know them on not just a financial basis but a personal one as well. I am an avid bowler that likes to compete locally, state wide and nationally. I have been the secretary/treasurer for two leagues and participated in the last 10 years. I use to snow ski, but it's been a few years since I've done that. Needless to say,I love the mountains, lakes and ocean. I have 3 beautiful grandchildren that I absolutely adore that now live in Rocklin, CA.